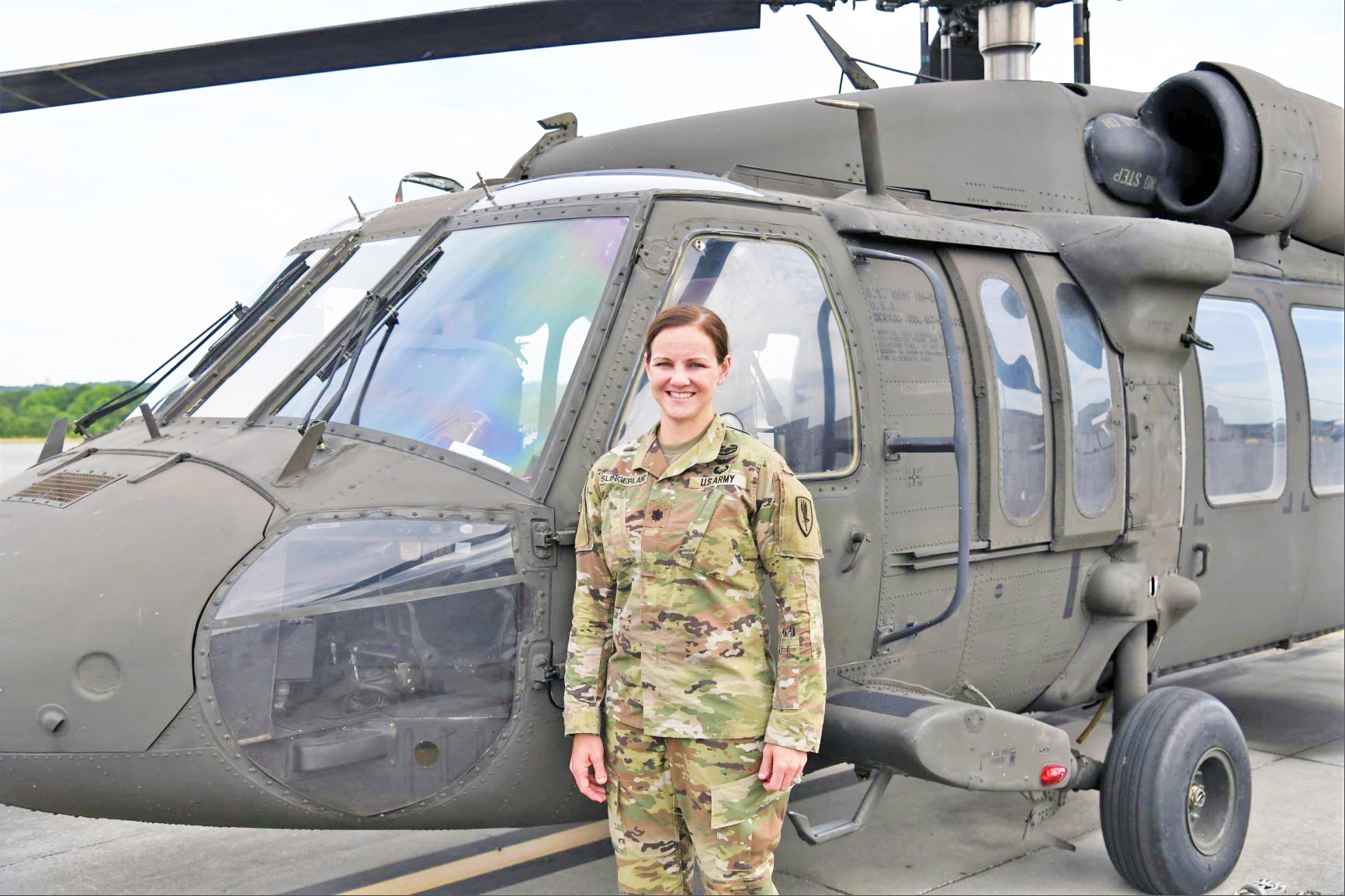 (Aug. 4, 2022) JEFFERSON CITY, Tenn. – Before Katie (Morris) Slingerland flew Blackhawk helicopters, before she worked at the White House, and long before she became battalion commander for 1st Battalion, 145th Aviation Regiment at Fort Rucker — she was a Carson-Newman University freshman who called Charleston, South Carolina, home.

She arrived on Carson-Newman’s campus her first year, an English major and a redshirt freshman for the Lady Eagles basketball team. She had no interest in the University’s Army ROTC program. With still getting adjusted to college life, ROTC just wasn’t on her radar — at least not yet.

From playing in C-N’s annual mudball tourney to gathering with friends at FCA events, Katie’s time as an undergraduate is a period she remembers fondly. She quickly recalls her best C-N classroom moment occurring when she had to present her senior English project in front of the class.

“I was so nervous, and I thought I was going to faint; however, Dr. (Jennifer) Hall smiled and kept me calm,” the 2004 graduate said. “I remember spending hours working on this project and agonizing over whether it was strong enough to pass. Finally, it was my turn to present, and I remember standing up front, shaking and delivering my presentation. I got an A+ on the project, but I remember the feeling of being elated my hard work had paid off,” she said.  “Dr. Hall's encouragement was such a blessing, and I was so happy to have completed one of my toughest assignments at C-N.”

But it was a Jogging 101 course earlier in her college career that began setting the gears in motion for her journey. “It turned out it was the Army ROTC physical fitness hour,” Katie said. “I loved it, and they invited me to their lab on Wednesdays. It was so much fun, and I truly enjoyed making lots of new friends. More importantly, it was a chance to be a part of an organization fighting for our nation. 9/11 was still fresh, and I knew I wanted to serve,” she said. My roommate and I ended up getting scholarships, and our cadre encouraged us to fly. Two weeks after becoming a second lieutenant, I found myself in flight school. God opened some amazing doors for me.”

From there, life seemed to move fast for Katie. Her first duty station after flight school was in Seoul, South Korea. Katie served as a platoon leader in the 2nd Infantry Division’s Aviation Battalion. Time passed, and Katie’s career progressed.

Following her tour at the White House, Katie moved to Fort Hood, Texas. While there, she made quite an impact and an impression on her superiors, ultimately selected for lieutenant colonel and entered battalion commander assessment. “I assessed favorably and was able to select the battalion I wanted to command,” Katie said, who now holds the rank of lieutenant colonel. “God was good, and we got our first choice here at Fort Rucker (The Home of Army Aviation), in the 1-145th Aviation Regiment. We get to have a direct impact on Army Aviation every day.”

Throughout her journey, Katie sought to have that impact. As she commands a battalion of some 2,250 soldiers, along with flight school and several advanced schools on Fort Rucker, she points to the lessons she learned while a Carson-Newman student.

“Carson-Newman taught me to continue to lean on the foundation of Jesus in all areas of my life,” she said. “Academically, I felt prepared, and I loved the smaller class sizes. The professors were accessible and approachable. The encouragement, love and support really continued to influence my life in such a positive way.”

Katie says she’s not sure what her journey would have looked like had she not decided to make that trip from Charleston to campus as a freshman.

“I most likely would not have joined the Army, would not have become a pilot, and I would not have had the life experience that shaped me into who I am.  The Lord opened the door for me to join the Army ROTC program at C-N, and I do not think I would have joined the program at any other school. Had I not joined ROTC, I never would have become a UH-60 Blackhawk pilot, met my wonderful husband, and had our amazing son.  I believe the Lord opens doors for a reason, and I am so glad He allowed me to attend Carson-Newman.

“If you make the Lord the center of your life and give Him the glory, He will give you favor and bless you more than you can imagine!”