Friends and family of Melanie Dorrill gathered at the Ozark Amphitheater to ask for anyone with information about the murder of the mother of two to come forward and give the family a chance at closure. Photo by Christina Faulkner.

A Dale County family is still seeking answers in the murder of their daughter, Melanie Amber Dorrill. A candlelight vigil held at the Ozark Amphitheater on December 3 rang with pleas for any who might know something about Dorrill’s killer to come forward as well as the sorrow and loss the family is feeling.

Bringing justice for Dorrill was the focus of the Saturday night vigil. Dorrill was found unresponsive at a home just inside the Coffee County line near the Rocky Head community in Dale County on October 4 after Coffee County Sheriff deputies responded to a call of an unresponsive person at a home in the 1800 block of County Road 117. When deputies arrived, entering the home, they discovered Dorrill. She was pronounced deceased at the scene. The Coffee County Sheriff Office reports Dorrill’s death is being investigated as a homicide.

During the vigil, Dorrill’s cousin, Angel Johnson, spoke on behalf of the family.

“They asked me to stand in front of our community because they can’t find the words in all of the hurt and pain they feel during this tragedy,” Johnson said. “We need this family’s voice to echo through our community until we have answers and eventually justice; because right now, we do not have that.”

Dorrill was described as a loving person who loved everyone equally. Her family and friends feel they have been robbed of the incredible person Dorrill was.

Johnson painted a grim picture for those attending the vigil of Dorrill’s “final birthday party,” telling those gathered how she and her cousin, Dorrill’s sister, Melissa prepared Dorrill for her funeral held October 8, the day Dorrill was born.

“That was Melanie’s last birthday party. It was her funeral because somebody else played God,” said Johnson poignantly.

The days after the funeral began to drag by for the Dorrill family as they waited for answers that have yet to come.

“So, here we are gathered at town square asking for your help to raise our voices a little higher and surround our family in compassion and guidance,” pleaded Johnson.

Dale County Sheriff Wally Olson says he knew Dorrill, and watched her grow up with her family. Olson says the constant struggle to deliver a death notice to a family becomes only that much more difficult when delivering one to a family like the Dorrills.

“I know the Dorrill family spends every day in shock and disbelief as they await the answers to who and why,” said Olson. “The grief and pain that follows the murder of a loved one – it cannot be fixed.”

Olson also gave a warning to those who have knowledge of the murder or who killed Dorrill.

“Because you really need to remember this, if you have the information and you choose not to come forward, you could be the next victim,” said Olson.

Anyone with information about the murder of Melanie Dorrill can call (334) 894-5535. Tips leading to the arrest of a suspect can be left anonymously.

Dorrill is survived by her parents, Joan and George Dorrill, her sister Melissa, and two children, a 19-year-old daughter, and a 16-year-old son.

Photos of Melanie Dorrill adorned a table set up along the sidewalk beside the Ozark Amphitheater Saturday, December 3, as the family and friends of Dorrill asked for ‘Justice for Melanie.’ Photo by Christina Faulkner. 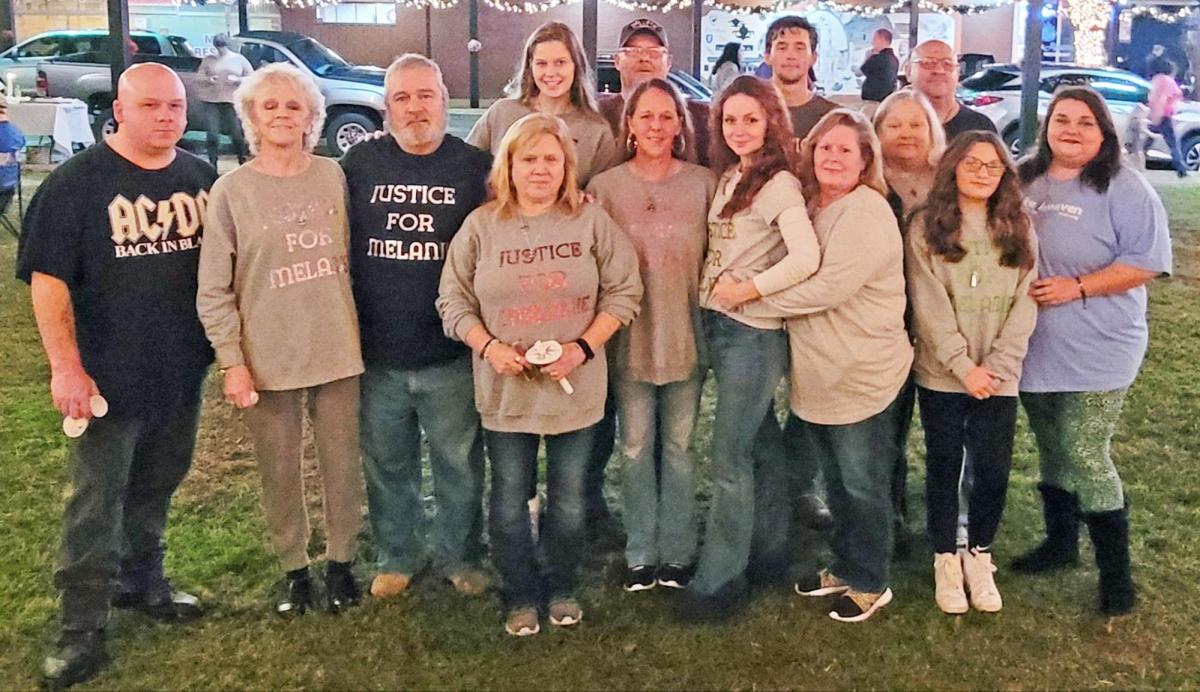 The Dorrill family posed for a picture after the candlelight vigil held for Melanie Dorrill at the Ozark Amphitheater on December 3. Dorrill’s mother, Joan, says she cannot find a reason to smile since the murder of her daughter. Photo courtesy of the Dorrill Family.

Editorial - The End of an Era