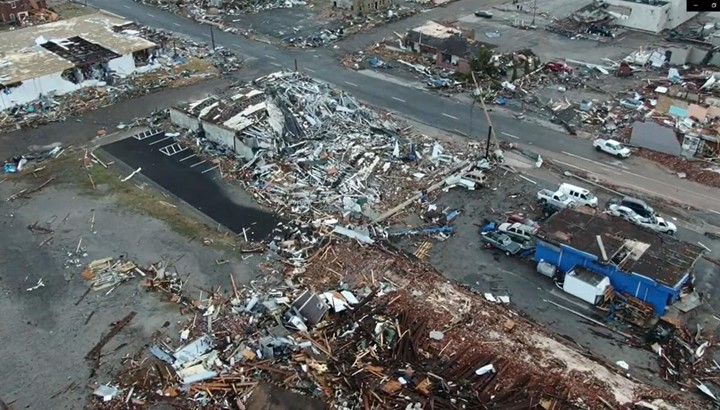 Deadly Storms Leave Trail of Destruction Across the South, Claiming at Least 9 Lives

A massive, deadly storm tore across the South on Thursday, stretching from Mississippi to Georgia. As of Jan. 13, at least five confirmed tornadoes touched down in Central Alabama, leaving at least 50 homes and other properties in tatters in Autauga County alone. In Selma, the historic birthplace of the Civil Rights Movement, local officials are still assessing the significant destruction to homes, churches, and other properties. Selma Mayor James Perkins has said that his community is just thankful there have been no confirmed fatalities, though a number of injuries have been sustained. The damage from the storm and multiple tornadoes include damaged or completely obliterated homes, roofs being completely removed, uprooted trees, damaged power lines that left more than 20,000 people without power and heat, and other forms of utter devastation in Autauga County; Dallas County, home to the Selma community; and several other communities in the South.

The tornadoes have claimed at least 9 lives so far, leaving families and communities trying to pick up the pieces as they mourn the loss of loved ones. County Emergency Management Agencies, Alabama Emergency Management Agency, Alabama Law Enforcement Agency, and other government entities have been coordinating efforts to provide disaster relief for the communities impacted by the deadly storms.

Autauga County Emergency Management Agency (EMA) Director Ernie Baggett spoke about the damage and ongoing efforts to provide relief to the residents impacted by this storm. He said,  “Search and rescue continued its efforts in a second round on Friday as they searched for survivors and victims. We just located another victim this morning, bringing our total to seven lives lost in Autauga County, but at this time, we believe everyone has been accounted for. We are checking with neighbors, friends, and others to make sure there are no other missing persons.”

Additionally, Baggett said that several roads in the area, including County Road 68, have been completely destroyed.” He went on to say that Alabama Power and Central Alabama Cooperative are working to restore power to the affected areas. Additionally, he said his preliminary estimate is that 40 homes were damaged, many of them being completely destroyed. Baggett also praised the outpouring of support the county has received, saying that a large contingency of agencies and groups are working together in the relief efforts, including Sheriff's Departments from Autauga and Chilton Counties, Montgomery Fire Depart., AL Game Wardens, Clanton Police, and numerous volunteer agencies and rescue squads.

Also, Baggett praised Autauga schools, saying, “they did such a great job of keeping all of the students safe and at school. If the schools would have released the students early, they may have been injured since a lot of the damage occurred on the bus routes. The school system saved lives by making the right decision. The superintendent also allowed students whose homes were destroyed to stay the night at the school, and they provided them with meals and other essentials during this difficult time for our community.”

The Autauga Co. Sheriff's Office has released the names of the identified victims after notifying their families. They include Carmin Autery, age 59; Christopher Alen Corbin, 46; Deanna Marie Crobin, 59; Tessa Celeste Desmet, 21; Robert Gardner, 70; Solomon Smith, 50; and Andrea Sue Taylor, 61. The storm claimed at least two more lives in Georgia, but their names have yet to be released. Officials confirmed that a five-year-old died after a tree fell onto the vehicle in which he was sheltering.

One Autauga County resident, Leighea Johnson, lost her entire home due to tornado damage. She spoke with the Star and mentioned that her daughter and toddler grandson were in the home as the tornado ripped it to shreds. Johnson said she tried to get into contact with her daughter to make sure was safe, saying, “I was going crazy and crying and worried sick about her safety because, at that time, my phone was dead, and I could not immediately reach her. I thank God that she only suffered mild injuries. She and the toddler huddled together in the bathtub as the home was ripped to shreds around them. My daughter was emotionally shaken as she talked about the terrifying experience of clinging to one another for safety inside the bathtub as the home was completely ripped away from around them, leaving them exposed. God took care of them, and I am eternally grateful He protected my babies”

This is just one of the many harrowing accounts of the devastation many residents experienced during this deadly storm. Johnson went on to say that she, unfortunately, did not have insurance to rebuild her residence, and they also lost appliances, clothes, and other essentials in the storm. She added that she hopes the Federal Emergency Management Agency (FEMA) will step in and assist in rebuilding their home. A GoFundMe has been established to raise funds to help the Johnson family with rebuilding their lives. If anyone wishes to contribute, they may do so by visiting www.gofundme.com/complete-loss-from-tornado-11223 . There are additional organizations listed below if you would like to donate funds or supplies to help these communities in need.

Alabama Governor Kay Ivey and other state and U.S. officials recently toured the communities impacted by the tornadoes, including Selma and towns in Autauga County. Ivey comforted the victims’ families and promised to work expeditiously to get all the aid to the communities they need to assist in the recovery efforts. Ivey, U.S. Congresswoman Terri Sewell, U.S. Senator Katie Britt, and other officials toured the damage and met with Mayor Perkins and other local officials. Ivey said, “We’re going to work with you, and when I get back to Montgomery this afternoon, I hope I can make contact with the president and encourage him to expedite the state of emergency order. We are going to do our very best to provide all the help you need.” Ivey also remarked upon the level of devastation she witnessed during her tour: “It is far worse than anything I envisioned or seen on television. Roofs are just gone, and trees look like toothpicks. There’s a lot of work that needs to be done, and I know we are going to pull together.”

The same day Ivey reached out to President Biden, he issued an order declaring a state of emergency so FEMA and other agencies can work quickly to get the aid and resources to Alabamians affected by the storms. Biden announced that he will do everything he can to get the much-needed aid to those impacted by the deadly tornadoes as quickly as possible. The president’s order will provide assistance in the form of grants for temporary housing, home repairs, low-cost loans to cover uninsured property losses, and other programs to help individuals and business owners recover from the effects of the disaster.

Additionally, if anyone wishes to make a tax-deductible monetary donation to help the communities affected, you may do so by visiting the Black Belt Community Foundation at (334) 874-1126 or by visiting  blackbeltfound.org. Furthermore, you may donate to Central Alabama Community Foundation at cacfinfo.org, or by calling them at (334) 264-6223 and specify that you wish to donate to the disaster relief efforts in Autauga and Dallas Counties.

Leighea Johnson shared heartbreaking images of the debris, which is all that remains of her home. 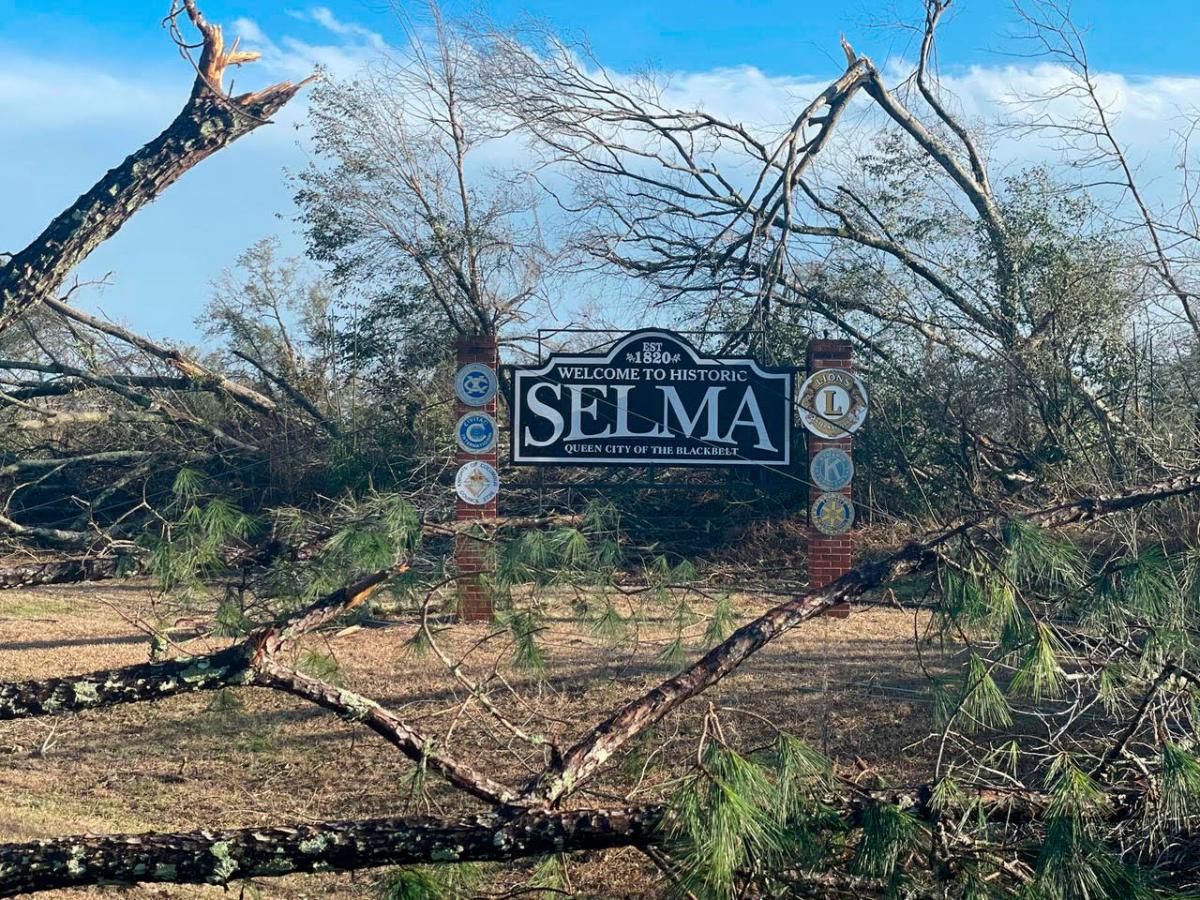 Ivey, Sewell, and Britt Comfort residents while surveying damage in Selma. This photo and the one above are both courtesy of the AL Governor’s Office